On the 15th January, we had the opportunity to join the agricultural European Innovation Partnership (EIP AGRI) focus group on Reducing the use of antimicrobials in poultry farming for their visit to the Experimental Poultry Research Centre of the Province of Antwerp in Flanders.

The EIP focus group is a gathering of various poultry experts from across Europe with various expertise from farming, veterinary, industry, research and policy backgrounds to discuss challenges and opportunities to stimulate the transition towards more prudent use of antibiotics in poultry farming. Their visit to the experimental center was organized alongside their second focus group meeting.

An afternoon symposium was organized for the group during which the DISARM network was promoted. The main topic of the symposium was focused on the revolutionary technique of on-farm hatching of broiler chicks. This innovative practice improves the health, development and welfare of the chicks since the stressful post-hatching period and processing in the hatchery is being cut out of the production process. The day-old chicks hatched on the farm can have direct access to feed and water and do not have to be transported from the hatchery to the broiler farm. The direct access to feed and water and reduced stress from handling the chicks and transport results in a better early life start with better gut development as well as potentially improved immune development. 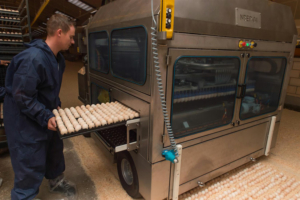 Consequently, the hatching process is being monitored with ovoscan sensors measuring the egg shell temperature in real-time so that both farmer and hatchery have insight and control over the hatching process. As soon as the chicks start to hatch the system offers the benefits of the on-farm hatching.

The system is remarkably flexible since it requires no investment costs from the poultry farmer. This also makes it possible to switch back to stocking conventionally hatched day-old chicks. The only point of attention is to be able to squeeze the three additional days of hatching into the downtime between production cycles without hampering effective cleaning and disinfection and to closely monitor the climate of the broiler barn in the pre-hatching period. Extra heating cost for the hatching period should be recoverable with savings on medicine use and less problem solving later on in the production cycle. Data from the poultry veterinary practice DEGUDAP guiding the farmers that have adopted the NestBorn concept, showed reductions in the use of antibiotics of 50 to 62%. Moreover improvements in feed conversion of 2 to 4 points have been observed as well on commercial farms.

To conclude the symposium the testimony of the early adopter poultry farmer Gerard Witlox emphasized the practical benefits of the system and positive effect on his work, joy and satisfaction because of less troublesome production cycles with healthier and more vital chicks. He has been using on-farm hatching for 2 years now and he considers it as the most significant innovation in broiler production for the past 30 years.

The NestBorn system and the egg placing machine are patented and their use is only allowed under a licencing agreement with HFHC nv, the NestBorn company.

Want to join the discussion?
Feel free to contribute!

DISARM at Agribex Instructive training on biosecurity and application of Biocheck: a risk-based...
Scroll to top

This site uses cookies. By continuing to browse the site, you are agreeing to our use of cookies.

We may request cookies to be set on your device. We use cookies to let us know when you visit our websites, how you interact with us, to enrich your user experience, and to customize your relationship with our website.

Click on the different category headings to find out more. You can also change some of your preferences. Note that blocking some types of cookies may impact your experience on our websites and the services we are able to offer.

These cookies are strictly necessary to provide you with services available through our website and to use some of its features.

Because these cookies are strictly necessary to deliver the website, refuseing them will have impact how our site functions. You always can block or delete cookies by changing your browser settings and force blocking all cookies on this website. But this will always prompt you to accept/refuse cookies when revisiting our site.

We fully respect if you want to refuse cookies but to avoid asking you again and again kindly allow us to store a cookie for that. You are free to opt out any time or opt in for other cookies to get a better experience. If you refuse cookies we will remove all set cookies in our domain.

We provide you with a list of stored cookies on your computer in our domain so you can check what we stored. Due to security reasons we are not able to show or modify cookies from other domains. You can check these in your browser security settings.

These cookies collect information that is used either in aggregate form to help us understand how our website is being used or how effective our marketing campaigns are, or to help us customize our website and application for you in order to enhance your experience.

If you do not want that we track your visit to our site you can disable tracking in your browser here:

We also use different external services like Google Webfonts, Google Maps, and external Video providers. Since these providers may collect personal data like your IP address we allow you to block them here. Please be aware that this might heavily reduce the functionality and appearance of our site. Changes will take effect once you reload the page.

The following cookies are also needed - You can choose if you want to allow them: